Gonzo Quest Slot was NetEnt’s flagship release and the company’s first platinum game. The game came out in 2010. NetEnt had already established its foothold in various gambling markets by then. Gonzo Quest Slot would give NetEnt an unprecedented popularity boost that would make it a household name in gaming circles. Here’s a meticulous look into this casino classic that has enthralled both new and veteran gamblers. 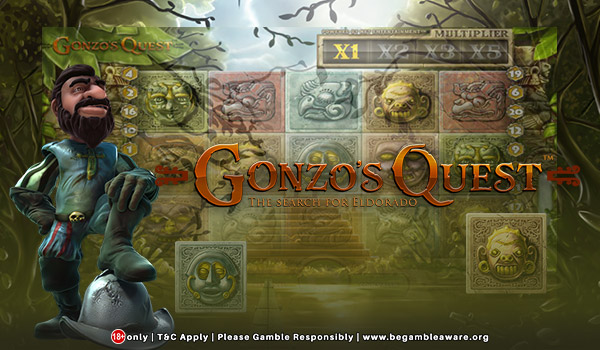 The storyline of Gonzo Quest Slot is as amazing as the game itself. It is based on Gonzalo Pizarro, a Spanish conquistador of the 14th century. He was sent to South America by a Spanish king on a mission to discover the hidden city of El-Dorado. Backed by the wealth of Old World, Gonzalo’s quest for gold takes him to Peru, from where he starts his journey. Towards the end of his adventure, Gonzalo actually revolted against his own king to avoid the exploitation of the local people.

Gonzo Quest Slot has perfectly mastered the ancient ambience with Aztec statues, tropical flora, rock carvings, native sound effects, and a ton of theme-based features. The character Gonzo in the game also reacts to your every win with short animations. The game also has 3D animations for a more realistic feel.

Beyond the design façade, Gonzo Quest Slot has some of the most innovative gaming features. The game has seven basic symbols Moon, Alligator, Snake, Fire, Fish, Heath, and Bird. The wild symbol is marked as a question mark set in gold. There are 20 pay lines in total.

Unlike conventional reels, the symbols in Gonzo Quest falls down in place as blocks of rocks. This not only creates an amazing visual treat but also paves the way for the Avalanche Feature, which was an instant darling of the gambling community. It was a novel feature where the symbols explode to make way for new winning possibilities. This means that punters can win multiple wins in a single bet. There can be a maximum of four avalanche in a single bet. With every “explosion”, the multiplier increases; X2, X3, X4 X5.

The Free Falls Feature is another exciting multiplier feature. The symbol is a golden head and this feature is triggered once you get three free fall symbols on three consecutive rows. The reward will be 10 free spins, which are basically risk-free bets. If you are lucky enough to hit the Avalanche feature while spinning on Free Falls Spins, the multiplier is multiplied by 3. It means you will win thrice the conventional amount in Avalanche mode; X3, X6, X12, and X15.

The coin value in Gonzo Quest Slot has a wide range. You can set your bet to as low as 0.20p and move up to a maximum value of £50 on a single bet. This makes Gonzo Quest a casino game for every kind of player, be it casual betting or high roller action.

Gonzo Quest Slot has one of the highest RTPs in the slots kingdom. It is pegged at 96%, which gives punters an extra edge to win. The success of this game lies in consistent betting, which can yield high amounts of return. The Free Fall feature appears quite often giving you a chance to access 15X multiplier on a single bet. Overall, Gonzo Quest Slot remains a charming casino game to experience the power of progressive slots.

Name: Everything You Need to Know about Gonzo Quest Slot