Gonzo’s Quest Slot Review: Everything You Need To Know 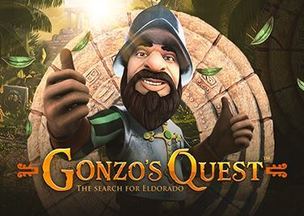 If you’re a fan of adventure based online video slot titles with a twist, then we would suggest checking out Gonzo’s Quest. Backed by leading software provider NetEnt, the hugely popular game has some of the best graphics in the online slot arena.

Before you get started, be sure to read our in-depth review on the slot game. We cover everything from how the slot works, its RTP, bonus features, payouts, and more!

Based in the land of Eldorado, the underlying theme of Gonzo’s Quest centres on the main character – Gonzo, searching for the lost city of gold. For those unaware, Gonzo is actually based on the legendary explorer Gonzalo Pizarro. As such, although the Gonzos Quest slots game does utilize a somewhat fantasy approach to the theme, the main concept is based on true events.

Nevertheless, in terms of standard gameplay, Gonzo’s Quest offers a 5 reel layout, with 20 paylines in operation at all times. However, rather than using a traditional spinning reel function, the developers have implemented the avalanche reels format. Although the outcome is the same, the reel symbols are replaced in the form of an explosion, as opposed to a conventional spin.

One of the best benefits about the Avalanche Reels format is that when you land a win, the symbols are replaced by new symbols on the same spin. For each subsequent winning combination, the wins are multiplied by a higher amount – upto a maximum of 5x.

As we noted earlier in our review, Gonzo’s Quest is often regarded as having one of the best graphics in the online slot space. NetEnt have done a remarkable job with the ongoing 3D visualisations and random sound effects, subsequently ensuring that the end-to-end gaming experience is first-grade.

Back to the main theme layout of Gonzos Quest, the base game symbols are mainly dominated by historical Mayan masks and faces. At times, it can be somewhat difficult to differentiate between the Mayan symbols, as in most cases the only thing that sets them apart is the colour. However, this isn’t a concern per-say, as the Gonzo Quest slot will give you a full breakdown of each winning combination, once landed.

First and foremost, the Gonzo’s Quest slot machine comes with an RTP (return to player) of 96%. This is actually quite competitive, especially when you consider the industry average of 94% to 96%.

Moving on, Gonzo’s Quest slots online comes with a rather broad stake scale that will attract to both low and high stakes player. At the lower end, you can play the slot game at just 20p a spin. If you’ve got a higher appetite for risk and plan to chase the maximum payout, you can play at a staggering £200 per spin.

Regardless of how much you stake when you play Gonzo’s Quest, the RTP will always remain the same. Furthermore, all wins are paid from left to right, which once again, is industry standard.

When it comes to payouts, the smallest wins are represented by the Blue, Red, and Bronze masks─ which pay 50x, 75x, and 100x for 5 symbols in a row, respectively. The highest win offered on Gonzo’s Quest casino slot is landed when 5 or more blue faces appear in a row, which pays a very juicy 5,000 times your stake.

When playing the base game in Gonzo’s Quest, it can often feel like a lot is going on. This is great for those of you that crave constant bonuses and features. Firstly, Gonzo’s Quest online slot does of course come with wild symbols, which replaces all other symbols (including the fall symbols), apart from the scatters. The wild symbol is represented by a question mark.

In order to trigger the main feature game, you will need to land 3 or more scatter symbols. These are represented by a gold coin. Known as the Free Fall feature, the main bonus game offers 10 free spins. On top of netting significantly more wild symbols than the base game provides, the Free Fall bonus also boosts the Avalanche feature multiplier by some distance. Don’t forget, this is when a winning combination is replaced by a new winning combination during the same spin. In the feature round, the multiplier goes from 3x, 6x, 9x, to a huge 15x!

As NetEnt is arguably one of the most popular and well-regarded online casino developers in the industry, it will come as no surprise to learn that Gonzo’s Quest is also available to play on your mobile or tablet device. Much like in the case of live casino games – as long as you have a reasonably good internet connection, you can access the game via your default mobile web browser.

All of the same features, symbols, and RTP rates can be found on the mobile version of the game. In fact, there is very little difference at all. After you play Gonzo’s Quest on your smaller mobile screen a few times, you’ll soon see that gaming experience is just as innovative.

In summary, there really isn’t much not to like with the Gonzos Quest slot machine. Firstly, the graphics are, in our opinion, as good as it gets in the online slot arena. You’ll be accustomed to top-notch visualizations and sound effects throughout the game, making Gonzo’s Quest an enjoyable slot to play long-term.

RTP wise, 96% offers great value, especially when you factor in the top jackpot prize of 2,500x. Moreover, during the bonus game – which offers 10 free spins with enhanced wilds, you stand the chance of having your wins multiplied by 15x.

Finally, if you like the option of being able to gamble while on the move, you’ll be pleased to know that you can access the fully-fledged version of Gonzo’s Quest via your mobile or tablet web browser. As a closing note – and as per Gambling Commission regulations, it is crucial that you engage in responsible gaming, especially considering the maximum spin stake of £200.