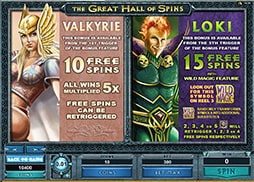 Thunderstruck online slot by Microgaming takes you to the land of Asgard, where the most favoured Nordic god, Thor, reigned with incredible power. And centuries on this legend still lives, as this online slot brings to your screen the incredible might of the god of storms through a generous Free Spins Bonus Game and rewarding gameplay.

This game is pretty basic in its features and design, but it has been incredibly popular since its introduction in 2004 – so much so that Microgaming have developed a follow-up game; Thunderstruck II. We would suggest that you first get a taste of this original with its generous multipliers and a great Free Spins Bonus Game that reflects the influential power of Thor before heading to the sequel to this video slot.

This online slot is one of the most played slots, and for a good reason; while playing this game you can cash in great awards from the Free Spins feature which has up to 30 free spins on offer, while all wins during both the base game and bonus game are subject to a 3x multiplier. It’s considered a classic among most gamers, and certainly a favourite among slot lovers.

Meet the God of Thunder

Thor rules this medium variance video slot Thunderstruck with an iron fist, and the game really delivers on all fronts. You’re immediately taken to the reels that are full of symbols that correspond with the legend of Thor. You’ll find a panel below the reels with all of the controls necessary for game play.

Those who are only playing the game for a bit of light fun, you may want to control the game using the Regular option. The ‘Select Lines’ button allows you to activate from 1 to 9 pay lines, depending on your preference. You can also choose the number of coins per bet, from 1 to 5, through the ‘Select Coins’ button. The Bet Max allows you to bet at the maximum, 45 coins per spin, but if you prefer, you can bet at the minimum of 0.01 per spin.

Go for the Expert option, and you’ll be able to use the Autoplay feature of this game, making the reels spin 5 or 10 times consecutively. However, if you’re looking for even more customized gameplay, then click on the ‘Autoplay’ button to adjust the spin settings, stop settings, gamble feature settings.

The thundering graphics and sound boom in the background welcome you as the game starts. Light, power, and intense graphics fill your screen as you spin those reels which host an entire selection of storm-related symbols that have to do with the legend of Thor.

You’ll find the mighty Thor himself, along with Thor’s hammer and Thor’s fist. The lightning, stormy castle, rams and horn are all aspects of Thor’s story according to Norse mythology, and all present on the reels. Along with these special symbols, are the generic poker.

Thor’s quick and hot temper is reflected in the RTP of the video slot, which is 96.1%. The strongest god of Asgard certainly knows how to treat his people, and this isn’t even the half of it.

The Wild Thor will reward the highest out of all the symbols, paying at most 10,000 coins when you create a winning combination of five of these. Next is the Thor’s Hammer and Thor’s Fist symbols, which will each award you 750 coins. The Stormy Castle symbol will reward you with 400 coins, while the Lightning Strike and the Horn symbols pay 250 coins each.

For more information on the amounts payable during gameplay, head to the paytable which can be accessed from the ‘View Payout’ button that’s located right on top of the control panel.

The Wild of the game is the mighty powerful Thor, which substitutes all of the other symbols on the reels apart from the Scatter Rams symbol. Once a Wild is included in a winning combination, all of the wins are doubled. The protector of mankind surely knows how to treat his people.

Meanwhile, the Scatter Ram symbol does not need to appear on a payline to award the win. Scatter wins are added to payline wins multiplied by the total number of credits staked.

Landing on three, four, or five Scatter Rams on the reels will activate the Free Spins Bonus Game of this video slot. All the bets and lines that are played during this feature are the same as the game that started the feature. Thor uses his strength to award you with a staggering fifteen free spins, which can be retriggered for each time that you land on three or more Scatter Rams symbols on the reels.

Thunderstruck slot by Microgaming has become a favourite with slot gamers, and it’s become a hit on mobile too for its simplicity and high-rewarding gameplay. The game loses nothing when transferring from the desktop to the smaller mobile and tablet screens. So you’ll be able to enjoy this game on the go, anytime, anywhere.

For a chance at multiple wins, a Free Spins Bonus Game that never seems to run out of spins, and a game design that is simple yet engaging, we can certainly see why, over more than a decade later, Microgaming’s Thunderstruck is still a favourite among online slot players.

Thor has made sure to include all of our favourite features, while not over complicating matters with too much show. This is certainly a game that players are going to keep on loving for a long time to come! Another fun slot to play is the exciting Rainbow Riches slot.